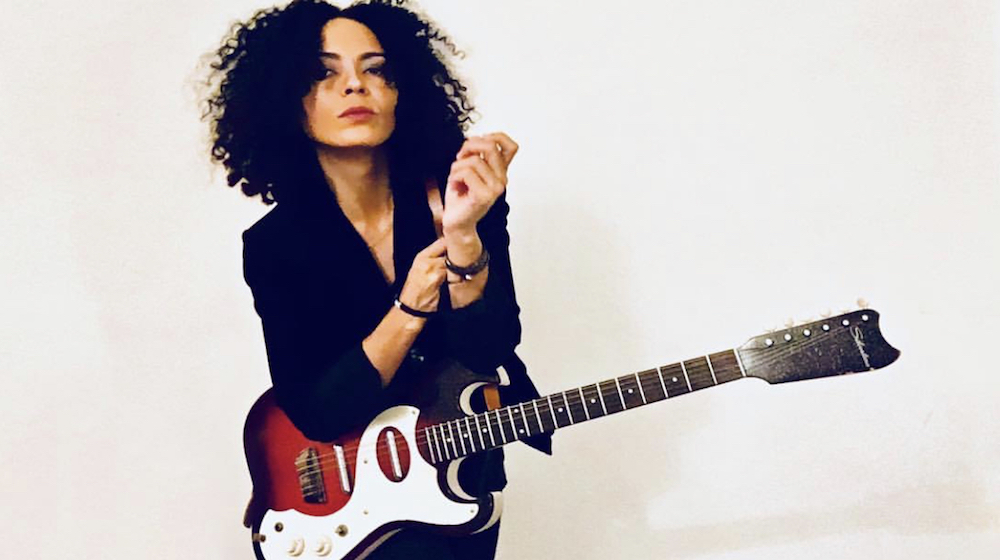 Melissa Dougherty was one of those kids who was always certain she wanted to be a rock star. She remembers watching MTV music videos in her youth, pointing at the screen and telling her mother, “I wanna do that.”

Melissa started with the piano, setting her expectations of learning how to play like Elton John and Billy Joel, though her teacher kept her in the book primarily, which she admits probably paid off–she’s been teaching guitar and songwriting classes at the Silver Lake Conservatory of Music since 2007.

Growing up, Melissa would hang out with the other musically inclined kids in her town. She’s from Brooklyn, but has called Las Vegas, San Francisco and Los Angeles home. One of the first bands she was in was with her friend Ronnie Vannucci, who we know now as the drummer for The Killers. From a young age, Melissa understood the value of a solid community that supported her ambitions. She attended Berklee School of Music on a scholarship, and went on to attend Whittier College where she double majored in English and Religious Studies, minored in Art History and studied jazz, participating in various ensembles.

“I’ve always been a song person. I love jazz, I love singers, so that’s the thing with me,” said Melissa. “I always wanted to write songs.”

Playing in front of large audiences is nothing foreign to Melissa; she’s shared a stage with artists such as The Killers, Red Hot Chili Peppers, Jack White, Pearl Jam and most recently she’s back from a North American tour with the 14-year-old sensation, Grace VanderWaal. This was also the first gig Melissa got through Jammcard, which she joined at the start of 2018. She had come to know the platform’s founder, Elmo Lovano, years before when they were both playing in rock bands around L.A.

“I was just trying to figure out how to get a gig without having to go out and drink and schmooze,” Melissa said. “It’s a lot, so I figured out what I could do on my own. I started just recording myself in my house, playing guitar, little improv things.”

She started posting what she was making to Jammcard.

“I would just keep in touch and go to the JammJams,” she said.

Then sometime around March, Melissa received a message from Elmo saying that there was an artist in need of a guitarist for their summer tour. Melissa was given the dates, and a rate, but wasn’t told who the artist was. Once she heard back that she was a favorite of those being considered, she was asked to record video of herself playing three songs, which were assigned to her.

“I’m a teacher, and have a really good ear, so I picked it up really fast,” said Melissa. “I learned it, sent the video, and then two days later I got a call from her then manager, and that’s when I found out who the artist was.”

Melissa was informed that she was the top choice for the gig, and was asked to fly back east to rehearse with the band, and play a couple of trial shows.

“I learned about 20 of the songs, because I wasn’t sure what the set would be,” Melissa said.

She played one show in upstate New York with the full band, and then one acoustic show with just Grace at the Sony building in Manhattan. After that, she was in, and prepared to hit the road.

For Melissa, deciding to join the Jammcard community was the thing that exposed her to this opportunity, which she likely wouldn’t have heard about if she had stuck to the tired routine of schmoozing at the venues.

“Elmo knew I’m a teacher, and it was a good fit,” Melissa said. “I work with all ages, and a lot of young adults, so it made sense with Grace.”

It was on this gig where Melissa solidified her friendship with Dylan Meek, who was playing keys on the VanderWaal tour. Meek also got the gig by promoting himself on Jammcard.

“We became really good friends,” Melissa said of Meek. “He does a Sunday night thing, and I’ll go sit in with them sometimes, so that’s been great. I met him at a Jammcard party initially, and he ended up messaging me through the app saying he got the gig. I’ll probably be friends with that guy for the rest of my life.”

Melissa says that she’s enjoyed becoming a part of the community that Jammcard has helped to create; attending the JammJams and meeting people through other Jammcard events who all seem to share the same mindset when it comes to promoting artistry. To be clear, Melissa had experienced a significant amount of success before making herself a Card; her old band, Eastern Conference Champions, was featured on the Twilight movie soundtrack, to highlight just one of her accolades.

“I’ve been doing this forever in all different capacities,” Melissa said. “That tour [with Grace] was luxurious and nice, but I’ve had the complete opposite, and I can still experience the complete opposite. You can’t be complaining, you have to know you’re lucky to be there.”

By teaching at the Silverlake Conservatory of Music, Melissa is occasionally exposed to other opportunities, such as when she was called upon by Flea to do some auxiliary work for the Red Hot Chili Peppers. For artists like Melissa to have a presence on Jammcard benefits both the artist and the community, each being able to draw from one another in an honest fashion.

“Jammcard, it’s a great spot,” said Melissa. “I try to put something up if I’m working on something cool, or like tonight I’m going to see my friend who’s playing at the SoHo house, so I’ll post about stuff like that. I just get excited about music, and I love Jammcard because people are promoting more than just themselves … every time I look at it, I’m like ‘who are these people’?!”

Now that Melissa is back from tour, she’s looking forward to focusing on her own music once again. She describes her art as being in a state of change; a sound that echoes bands like The Kills, St. Vincent, Moses Sumney and Sade.

“Getting back from tour with Grace, I’ve just been clearing my head. I started this new project of mine before I got the gig with her, so it was on hold. And then doing all the gigs–it was a great tour, and the acoustic stuff with just her and I, that was always one of my favorite things to do. She’s such a great singer. Just an acoustic instrument, and the song, it kind of struck me. So with my stuff now, I want to be able to play with a band, but I also want to be able to just go do it myself … I have people I’m going to play with, but I think I’ll do just guitar, a nice amp, and just solo, like Jeff Buckley style. That’s the kind of thing I’m interested in right now. Something real. And I’d love to do another tour. I love touring, I think touring is the best thing in the world, to me.”

For an artist like Melissa who’s interested in furthering her career as a solo artist as well as continuing to play with others, establishing a sense of community is hugely important. Melissa says Jammcard has given her that sense of community.

“I like the comradery of it, I like the support of it, the nurturing of everybody. People can be very like ‘it’s my gig, and you’re the competition.’ There is that element in this industry and I feel like with Jammcard the vail has been lifted a little bit. And that can be attributed to Elmo; he’s such a giver and excited about music. He’s for the artist and for music, and that’s one of the most exceptional things about Jammcard, is how open it is, and how willing Elmo is to connect people.”

She emphasizes that no matter which community you’re a part of, it’s most important to always know your worth.

“You look at Jammcard and you’re like ‘oh man everyone is so amazing.’ It can be a little bit intimidating. And that’s one of the dangers of being online, especially with music. You can get a little bit in your head, or at least I do. You can’t forget what you bring to the table.”