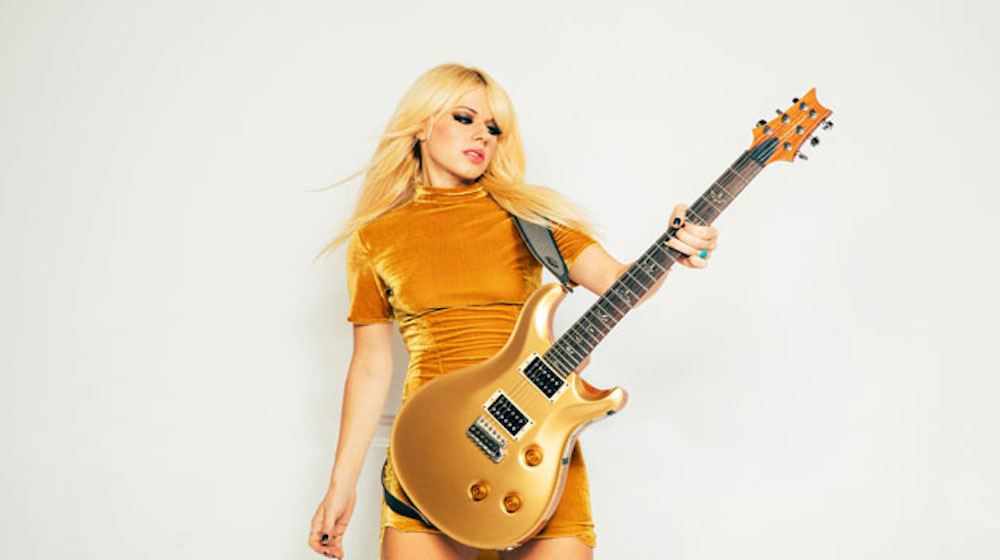 27 Sep Q&A: Orianthi On Industry Challenges, Her New Album, “What Ifs” And Jammcard

“The industry’s changed immensely. I think everyone feels it.” – Orianthi

Orianthi has had quite an interesting ride so far in her music career; from playing with some of the top acts in the world to wondering what could have been with a much anticipated Michael Jackson tour that never made it to fruition. Orianthi grew up in an era that thrived on the mystery of music and how artists would use that intrigue to mystify audiences and build an invisible connection between the fans and players on stage. Despite the ever changing music industry, she has remained true to her art and the sacred mystery.

Orianthi spoke with Jammcard about defining moments in her career, inspirations, and some other fun banter about her life and the world of music.

Jammcard: When you’re tapped in, playing the guitar, what do you see when you close your eyes?

“You know what, I see a lot of different colors. It sounds kinda weird … especially when you’re on stage … it depends on the audience’s vibe. There’s a lot of energy fills that you get off the audience. It’s a really special thing, I don’t know how to describe it, but it’s a lot of static energy.

When you close your eyes there’s a lot of light … and there’s all different colors that kind of play different notes or whatever it is with the music you’re playing … different sparks of color come into my mind.

And I don’t take drugs when I’m on stage (laughs).

When you’re in that state of mind, I think it’s a really spiritual thing … I really believe that. The whole universe, we all work off energy fills. Music’s such a powerful form of magic and I think that when you’re connected with the band and you’re playing and then the audience is connected to you … it’s almost like church or something, that you get elated, especially if you’re playing a song where everyone knows the song … everyone’s all in, and you’re all in that vibe. It’s a really special thing, a special feeling.”

Jammcard: What do you see as the biggest challenge facing artists in 2018?

“The industry’s changed immensely. I think everyone feels it. From when I moved over here to LA when I was 20 years old and I signed with Interscope records and I got my record deal … it was starting to change, but companies were still making a lot of money … it was happening in the 90’s of course as well as the early 2000’s. But now things have really changed, I kind of feel like it’s the ‘wild west’ with the way you can put out stuff yourself, there are so many artists that have big followings … they have millions of followers on Instagram or these other social media platforms, which I feel is really good, but at the same time it’s kind of weird too because you give a lot of yourself away and I kind of like the mystique of when you’d go and pick up a record and you wouldn’t see what your favorite artist was eating for breakfast. Now people are just so hungry for content constantly … which is cool but it’s a strange time … it’s also a time where you can pave your own way and you don’t need companies as much. You don’t make the kind of money you used to make, I think you spend more.

Artists spend a lot more money. Everyone kind of feels it, if you’re a huge artist or someone that’s just starting out.

What the generation now really want to see is kind of everything, they don’t want to have that mystique. They want to see everything about your life. You kind of get roped into it, you know what I mean? I’m on Instagram all of the time posting shit and random stuff just to keep the interest up on the feeds and what not. Other times you want to put it away and sit in the studio and play guitar for hours, for days for me sometimes and just put my phone away you know. It’s too much noise sometimes, too much static with all the social media stuff.”

Jammcard: What was the defining moment in your career that made you stop and pinch yourself?

It was when I was 18 and I was in Australia and Carlos Santana invited me on stage to play with him at Memorial Drive (Park). I was up there in front of 15,000 people, cause I knew all of his songs. He got me up there … he was like ‘You’re coming on stage with me tonight’ … I had just met him backstage and he signed my guitar … it was the craziest moment.

And then playing the Grammy awards for the first time with Carrie Underwood … my single becoming platinum, headlining a festival in Japan with 100,000 people singing back my songs … that was crazy. Playing with Michael Jackson as well, then Prince calling me. There are quite a few moments where you just go ‘holy crap’.”

Getting to jam with Prince for four hours in a recording studio.

I must say, I’ve been very blessed to be in the presence of all these innovators and all these people that have paved the way and inspired so many musicians and people around the world. Getting the call from Michael Jackson when he got me into rehearsal, he started dancing in front of me, I think Billie Jean was the first song we played and that was crazy. I’ll never forget how I felt in those moments and how it inspired me. That’s where I kind of draw from a lot of the time … when I need inspiration.

And Alice Cooper as well, working with him, that was incredible, being a part of that show.

Jammcard: Speaking of inspirations, who were your female guitarist inspirations when you first began playing guitar?

I’d say the first was Bonnie Raitt. And there was Jennifer Batten of course, I loved the way that she played. We became friends actually around the MJ time, she’s an incredible player.

And (Sister) Rosetta Tharpe as well. She was an amazing singer and guitar player.

Jammcard: “What ifs” are hard, but what if the This is It tour would’ve happened? How does that change your path?

That’s always in the back of my mind of course, I think that everyone involved will always think that because it’s kind of unfinished business there with Michael and everything and how he felt about it too, cause when we were on stage he really wanted to play that show. A lot of sadness comes with that. During that whole process he was such a perfectionist, he wanted it to be the greatest show on earth … we prepared for that. Everyday, we put in hours and hours of work – especially Michael. I just think that it would have been the greatest show on earth. I’ve only seen the movie once because it’s too hard. I saw the premiere, it’s too hard to watch more than that … a lot of mixed emotions that come with it.

Jammcard: Are you up to some cool stuff behind your creative curtain?

I’m just focusing on my own solo career right now. Making a new record right now in Nashville, just focusing on that. I’ve got an amazing manager over there and an amazing team. I’m just building up my brand new album which is actually called Love Bomb and we’re going into the studio really soon to actually make it happen. It’s really powerful sounds in it and I’m going to put everything into it. There’s heavy blues influence in it, heavy rock influence and kind of this voodoo, blues, rock/pop kind of sound. I’m excited. It’s taking shape already. It’s always exciting when you start a project and every song that comes out is in the same vein. It’s a really powerful sound so I can’t wait to get in the studio.

Jammcard: What are your thoughts on the Jammcard app and community?

It’s such a great network! I think it’s a wonderful thing. All sorts of musicians can connect with each other and get together. I’m actually getting together with a couple of different writers through Jammcard. Dave Stewart, my really good friend invited me on to it. I think it’s a really great concept, it really is. You get to collaborate and hit each other up and say ‘hey, let’s do something’ … it’s a really amazing thing. There’s a lot of talent in there.

Jammcard: Describe yourself with one word (that’s not Orianthi).

Jammcard: I read in an interview where you mentioned having a teacher in the past suggest “you should play the harp, because it’s more feminine.” What would you say to any young girls out there who are being given this type of advice?

“I would tell them to rack off (laughing).

Jammcard: Is that an Australian thing?

Rack off means kind of … you know … fuck off (laughter all around).

It was really strange, because that teacher happened to be a male ballerina.

To me, I was so obsessed with the guitar, to the point I’d go to school everyday, I’d be putting up fliers everywhere wanting to join a band. All the kids listened to the Backstreet boys and stuff like that. I’d wear Jimi Hendrix t-shirts to school and Bob Marley hats and all of that. I guess I grew up in a time because of my dad’s records, his vinyl collection … he had a lot of Jimi Hendrix, Santana, Cream, Bob Marley, all that kind of stuff – I’d get home from school and I’d be listening to those records and then reading Guitar Player magazine under the desk at school.