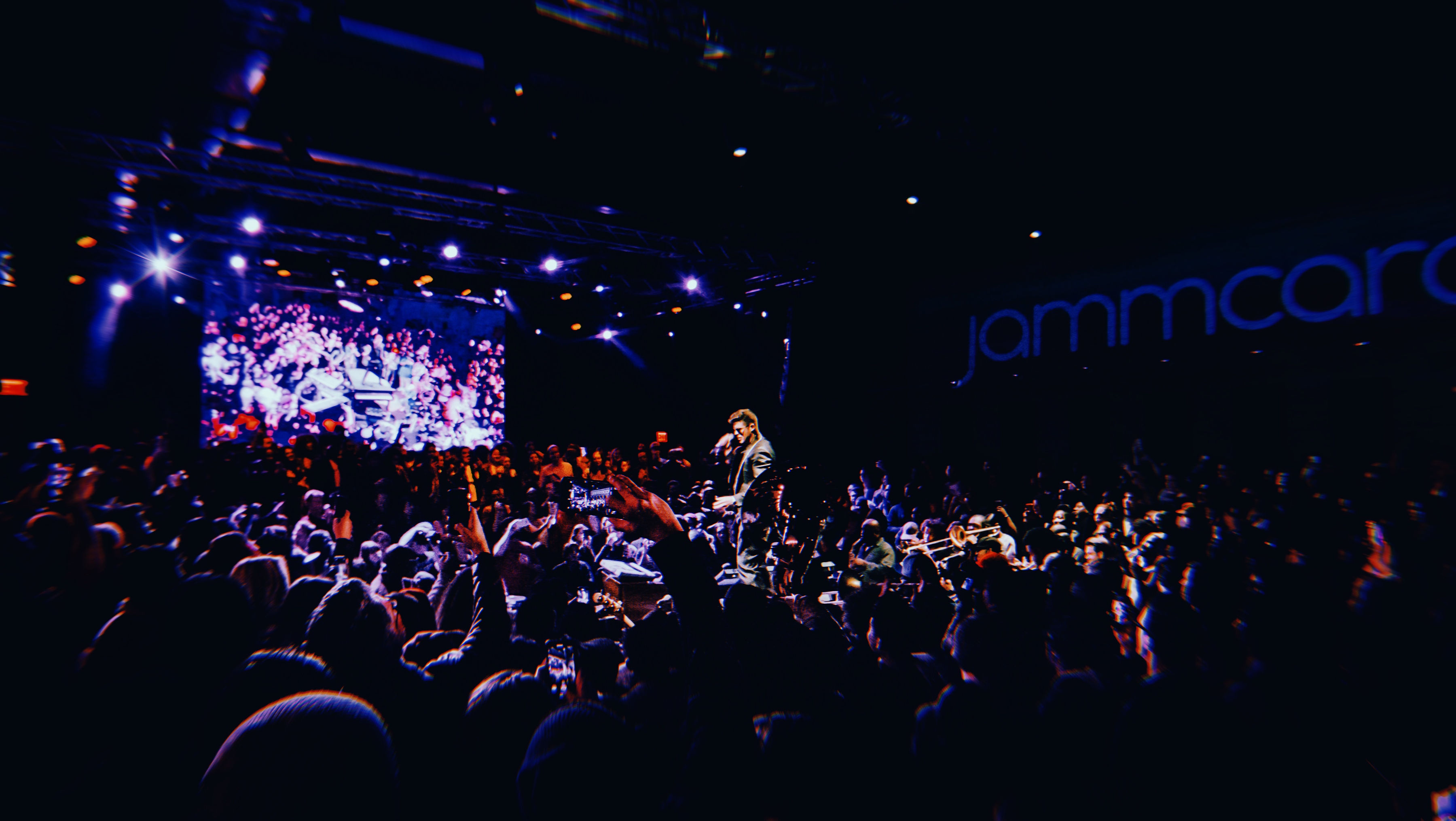 “My experience performing at the JammJam was amazing. Everyone in the room that night left with a lasting after effect of the evening’s events – myself included. The vibe was super organic, mixed with a hybrid of soul, hip hop and R&B on “11”!!! The musicians selflessly played from their souls, like a breath of fresh air. No “Ego’s” or negative energy to get in the way of musics’ integrity. The crowds electricity was through the roof! I feel so truly blessed to have been a part of this epic experience and memorable night!” – Larry Cox (musical director) Robin Thicke

Larry Cox has been Robin Thicke’s musical director for 19 years. Clearly, a working relationship lasting that long must be surrounded by trust. In December, Larry reached out to Jammcard founder, Elmo Lovano, with an invitation to come to the studio.

“Larry hit me up on Jammcard and said that him and Robin were recording at Henson and they wanted to meet me. I was down the street at United Recording, so I headed over that night.” Elmo recalled.

“Larry greeted me at the front and walked me back to Studio D and into the control room where Robin was there at the console. He was instantly super cool.”

After a few takes Elmo was brought into the lounge where the rest of Robin’s band was hanging.

“Larry told me he wanted to do a JammJam with Robin and the whole squad. I said hell yeah. We then discussed all the potential players that could collaborate to make the night super special.”

A week later, Larry hit up Elmo and said that Robin and him were serious. They set the date for a few weeks later. “Right after that, Alex Kurland (manager of The Soul Rebels) hit me up and told me that The Soul Rebels were gonna be in town to headline the Ace Theater just 3 days before the JammJam. And I was like, dude, let’s have The Soul Rebels play with Robin!!! He was down instantly.”

Alex went and checked back with the band, and Elmo hit up Robin’s team. “I pictured Robin playing ‘Blurred Lines’ with The Soul Rebels but with the sousaphone playing the bass line, and I knew it would be LIT.” Elmo says.

On the day of show, The Soul Rebels arrived at 6pm and Elmo introduced them to Robin Thicke, Larry Cox and Black Daddy (Robin’s band) for the first time, at soundcheck. They had never met or played together before.

What happened that night was magic.

Black Daddy kicked off the night with an hour long jam led by Larry Cox with the addition of two drummers, Jamie Gamble and Andre Montgomery. Charlie Bereal jumped in and performed his song “Brand New.” Then Larry brought up the fire trio that is The Truth Band. Every jaw dropped and faces melted to the floor. The Truth Band are like a new, blazing version of Band of Gypsies.

The Truth Band performing at the JammJam (VIDEO)

Next up was Chika, backed by Black Daddy. This was Chika’s debut performance in LA so people didn’t know what to expect. She blew everyone away with a new original of hers and a cover of Lauryn Hill’s “Can’t Take My Eyes off of You”.

Chika performing at the soundcheck of the JammJam (VIDEO)

Right as Chika finished, the sounds of marching horns entered from the back of the room. The crowd split, and in came The Soul Rebels!! They gathered around the JammJam’s  renowned circle and brought that New Orleans heat. The Jammcard crowd was losing it. After four minutes of a brass dance fest, in came Robin Thicke, and the show was on. Robin played an epic 40 minute set. He opened with his hit “Magic” which included him actually dancing on top of the piano that was placed in the center of the jam, and then went straight into “Lost Without U.”

Every face was smiling, every phone was out, and everyone was bouncing.

After a few more songs, Robin played his biggest hit “Blurred Lines” with the addition of the The Soul Rebels.

“This started with my friends in my living room, and now here’s Robin Thicke on his piano. The JammJam has come a long way” Elmo said in reflection.

The JammJam is an invite only event curated exclusively for our members. Apply to join Jammcard and maybe we’ll see you at the next one.