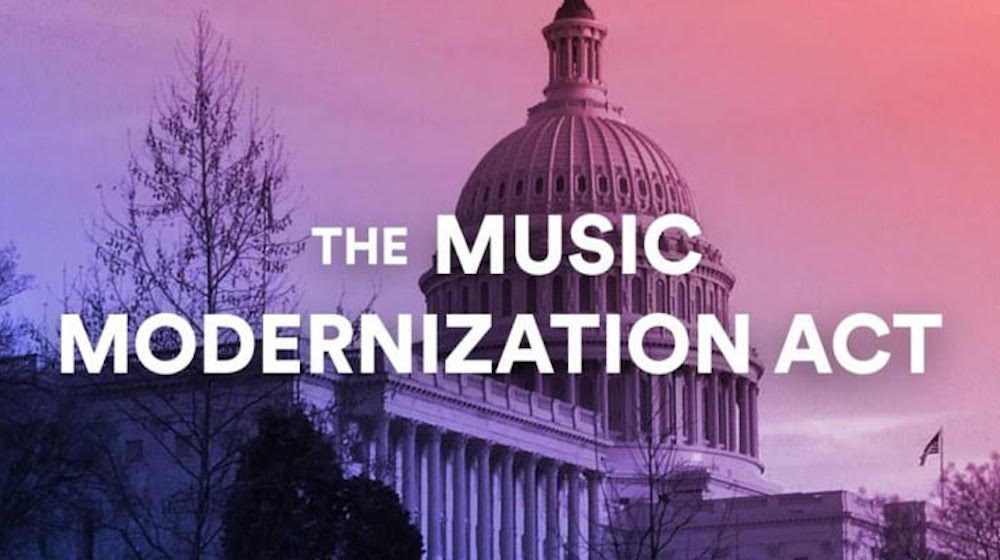 18 Sep A TURBULENT JOURNEY: THE MUSIC MODERNIZATION ACT FIGHTS TO BECOME LAW AMIDST THE CONFUSION

For many, a recent bill called the “Music Modernization Act”—dubbed “the MMA” for short—appears as a beacon of hope for the music industry. The bill, which proposes changes to the royalty payment process and music licensing laws, has unified the music industry in an unprecedented way, promoting kinship between two historically contentious sides of the business: songwriters and publishers, and Digital Service Providers (DSPs), or streaming services like Spotify and Apple Music. The MMA received a unanimous vote from the House of Representatives in June, and a revised edition is now under the consideration of the full Senate.

The MMA has achieved widespread support for its potential to solve the consistently troubling issue of paying songwriters their royalties accurately and in a timely manner. It would do so by updating the archaic music licensing process—setting up a new governing body run by publishers to administer blanket mechanical licenses on songs streamed through DSPs. As it stands, songwriters have no real power in the music licensing system, but the bill would give them voice by allotting self-published writers a number of seats on the new collective’s panel of directors, as well as on an advisory committee for handling unclaimed royalties, and on a committee for resolving ownership disputes. Most pertinently, this new agency would be responsible for collecting and distributing mechanical royalties—payments made to songwriters when copies of their compositions are created. Presently, Harry Fox Inc. (HFA) is in charge of handling mechanical royalties, but the distribution process has proven to be riddled with issues. For example, under the current system, DSPs can dodge paying songwriters for unregistered material by sending bulk “Notices of Intent” (NOIs) to the Copyright Office. In the meantime, DSPs continue to stream these unregistered songs, songwriters go unpaid, and NOIs build up, unresolved. This system error not only strips artists of their deserved royalties, but it puts DSPs at risk of lawsuits. In this way, the MMAs proposal for a new collective has also secured the support of DSPs, by relieving them of some legal pressure when they fail to identify rights holders of songs in their catalogues.

Under the new agency established by the MMA, a public database of all musical compositions would also be created, allowing songwriters a centralized way to identify where their songs have been used without credit, as well as granting them previously nonexistent audit rights. DSPs are currently holding onto millions of dollars worth of unidentified works, and should the MMA pass, this money would be passed on to the collective, which would work to match compositions and make fair payments. Moreover, while publishers currently have no duty to share payments for unmatched works, the MMA promises that songwriters would receive a minimum of 50% of these royalties. Beyond updating the royalty distribution process, the MMA promises to amend outdated rate-setting standards, which fail to address market values, routinely setting composition rates far below what they’re actually worth. The MMA also aims to revamp the current rate-court system by appointing a randomized judge to each dispute, rather than a single judge to cover all cases, ensuring each situation a fresh pair of ears. These changes proposed by the MMA are long awaited; as it stands, the US Copyright Act has governed the way music compositions have been licensed since 1909, prior to the advent of recorded songs—it’s clearly time for an upgrade. Organizations from ASCAP to BMI to the community here at Jammcard stand behind the bill, viewing it as a necessary stride for songwriters, publishers, and streaming services alike.

The MMA’s path to becoming law has not been without its roadblocks. Early on, the act’s progress was stalled markedly when Blackstone, the private equity giant in charge of HFA, and Performance Rights Organization, SESAC, suggested changes to a core tenant of the MMA. Viewing the MMA as a challenge to the business models of its investments, SESAC and HFA, Blackstone proposed that HFA remain in charge of paying royalties and other day-to-day administration, leaving the collective with the task of managing a comprehensive song database. In response, outraged industry professionals took to social media to denounce SESAC’s proposal, which would have benefited Blackstone and continued the same stunted royalty payment process. A slew of top songwriters chimed in, urging SESAC songwriters to break their contracts, and for non-SESAC songwriters to refrain from working with those represented by the organization.This outbreak of social media pressure, in tandem with the insistence of the Senate pushed SESAC to reach a compromise on August 2nd. Under this compromise, the new governing body will now be confined to administering mechanical licenses, preventing them from competing with private companies like HFA for synch and performance licensing deals.

Though the MMA remains a celebrated proposal, the haze of confusion prompted by SESAC has undoubtedly cost the bill some senatorial backing. The bill must pass by the end of the year, when the Congressional term wraps up, but supporters say they are crossing their fingers it will be pushed through sooner—hopefully by mid-October. It is now imperative that MMA lobbyists work hastily to reaffirm the faith of uncommitted senators, making up for time lost on the back-and-forth with SESAC. Recently, over 150 artists and music industry executives, including Paul McCartney, Pink and Stevie Nicks, wrote a stern letter to the parent company of SiriusXM radio to pressure the satellite radio company to change its licensing practices.

It’s been a turbulent journey for the MMA, but, if anything, the tizzy surrounding the bill has served as an awakening for songwriters who’ve been unengaged in the conversation surrounding their own rights. The discourse brings to light a sobering reality: songwriters have no direct stake in the current system. While writers are nominally represented by music publishers, the payment they actually receive for streams of their songs is meager and often sent late. Put a little grease on the wheels, and the Music Modernization Act has the potential to change all of this dramatically.