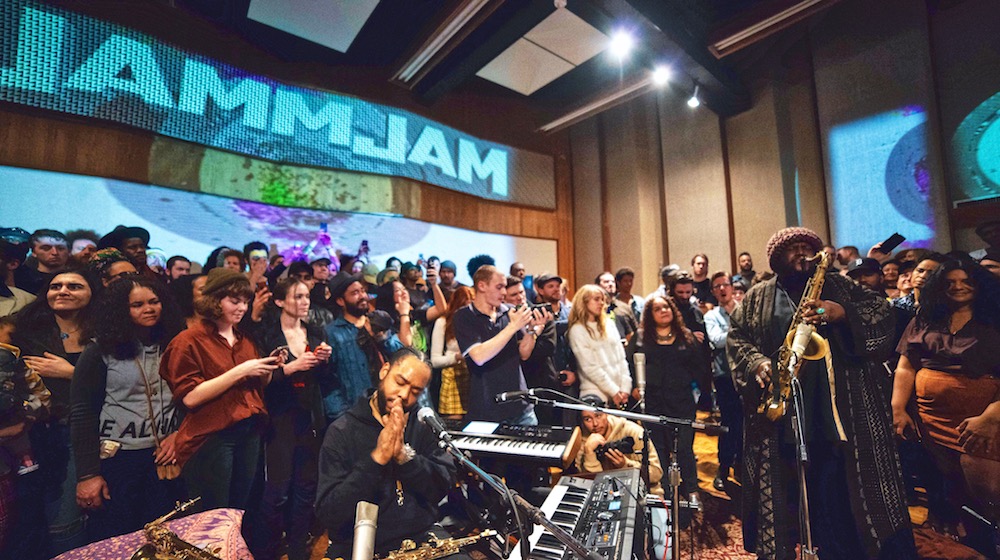 20 Dec A Special Kind Of Magic – One Night At a JammJam with Terrace Martin, Kamasi Washington, and Ronald Bruner Jr.

If the walls of the United Recording building on Sunset and Gower could talk, well, there’d be some very interesting conversation to be had. Countless legends have created masterpieces and formed important relationships on the premises, and it was once where Frank Sinatra did his bidding. So much has gone down within the acoustically treated rooms, and after last night, the walls have a new, very special story to hold on to.

It was 5:30pm on a Tuesday night when Terrace Martin started soundcheck in Studio A. The wooden paneling around the room was adorned with a green string of evergreen, and a red drum set, four keyboards and a ton of microphones were situated in the center of the room, surrounded by two sets of bleachers. An artful projection cast on three walls displayed the words, “Jammcard” and “JammJam.”

“I think there’s something special about the whole chemistry once it all comes together,” says Jammcard founder, Elmo Lovano. “We’ve done around 20 of these, and there hasn’t been anything short of a homerun, and they just keep growing.”

The JammJam has arguably become the most popular of Jammcard’s supplementary series. The highly anticipated, invite only events are held in various spaces meant to inspire those who are selected to fill them. Though, nothing is more inspiring than the artists who are featured; past JammJam featured artists include Ty Dolla $ign, Cory Henry, Judith Hill, Mono Neon and even Jeremy Renner, all of whom came with their own posse of recognizable and notable talent. Last night, the JammJam welcomed Terrace Martin and friends, and featured Jammcard 20 Under 20 winner, Justus West and his band as the opening act–something different compared to the open jam that usually happens before the featured artist, where people in the room can tap in and play with an incredible mix of willing and very able participants. Justus’ band last night included Joe Cleveland on bass, who’s played with Miguel and Rita Ora, Chris Payton on guitar, who’s worked with Katy Perry and Robin Thicke, and Quinton Gulledge, who doubles as a monstrous drummer and keys player and has toured with Beyoncé and Jay-Z. The relationship these artists establish for their moment at the JammJam is sacred. Before his performance, Terrace described the members of his band for the evening:

“We got Paul Cornish on the Fender Rhodes. I met him through Herbie Hancock and by way of Robert Glasper. He’s a young cat, he goes to the Thelonious Monk school. He’s one of the young lions who’s up and coming right now that I really believe in. He has a beautiful outlook on life and that affects his music. Then we have Joshua Crumbly, he’s a native of California. He plays upright bass, electric bass; he’s a monster. He’s spent a lot of time in New York, very open too, and understands the moment, and has a great sound. He’s a great guy. Very observant of what’s going on. And Ronald Bruner, I’ve been playing with him since I was 15 years old. We went to high school together, studied together, went to college together; we’re like brothers. He understands me and I understand him, so we have a dialogue. We’re playing with two new cats who we don’t really know, and we have our thing, and I like that contrast. I think that with the particular platform, we have no choice but to be honest and to accept the moment. We’re getting to know each other as we play, which means we’re having a real conversation. It’s open like that.”

Elmo says the way in which he’s curated the artists who end up playing at the JammJams has been a completely organic process. Never has there been an expectation for what the artist should play; it’s up to the artist. Elmo can trust it’ll be legendary.

“I love exposing people who deserve exposure,” says Elmo. “I joke, because every time I leave I say ‘that was my favorite one.’ I say that every time.”

Something that contributes to the unique appeal of the JammJam is the arrangement of the room. Elmo’s philosophy is that by having the musicians in the center of the space, each performer is seen and heard equally.

“There isn’t a lead singer with musicians in the background, and there isn’t the band in the front with the string players in the background; everyone’s equal in that circle. They have the same amount of light on them,” said Elmo. “It just empowers people. You also have a clear visual of everybody, it’s not like your drummer is behind you and you have to turn around for a cue.”

With the JammJam audience being hand-picked each time, there’s an advantage to everyone involved compared to a typical live music show where anyone and their mother could attend. Of course, if your mother is a music industry professional, she’d be eligible to receive an invite.

“If you just let anybody into the event, you’d have people that aren’t vetted, and you just don’t know; you could have people that cross boundaries with the performers,” says Elmo. “But since you have a room full of people in the industry, everybody understands the etiquette. … For the musicians, the best way you can learn is by being that close; you’re right behind Ronald Bruner, or whoever it is on drums–Devon “Stixx” Taylor, Mike Mitchell, Stanley Randolph, or any of these cats, you’re right on them. But also, as a performer, at least for me as a drummer, I love having people right behind me, because you feel their energy. I feel like that helps multiply your energy. When you’re playing you can see these people, but I can feel these people too.”

While it’s true that you don’t necessarily need to be a Jammcard member to get into a JammJam, it certainly increases your chances.

Timmy Manson Jr. was attending his very first JammJam at United, and had been invited to come early to help out as needed during soundcheck. He’s a young pro and had been accepted to the network about a week before.

“Ronald’s definitely about to go off,” said a bright-eyed Timmy. “Definitely planning on connecting with new family. I’m excited man, I’m getting to meet everyone in my group, my family.”

That family, or community aspect of the event is something that Elmo and his team really try and emphasize.

“Jammcard is more than just an app, Jammcard is a community,” Elmo said. “Doing in person events is one of my favorite things to do. [Plus, he just loves the idea of a super jam among peers.] The app helps to make it bigger and facilitate more things than just an event would be able to. You can meet people at an event and continue a relationship with them in the app, or you can meet people in the app and meet them in real life. It goes both ways.”

During soundcheck, it was apparent that Terrace Martin had a vision for how he needed the music to work for the moment. Terrace is known for playing a range of styles, and chose to have his band perform a set of straight up jazz for last night’s JammJam.

“I just want to give back to the essence, playing a little vibe that we love,” he said before the show. “There was no rough decision, it was just ‘let’s go in there and play what the good Lord tells us to play.’”

Terrace is a true artist, and holds a high standard for the way his band interacts with one another. For the night of the JammJam, Terrace was focused on putting musicianship first. He shared that when he’s playing music, he doesn’t pay attention to much else except for what’s happening between him and his fellow musicians.

For Terrace, these performances are meant to showcase a strong fellowship, where everybody is on a fair playing ground.

“It’s really not about the music, it’s about the fellowship of different musicians, and different artists. What I hope to bring is to maybe put the musician factor behind, and put the human being factor in front. That’s what I hope to display tonight.”

No doubt, Terrace and his band were successful in achieving that. Between numbers, Martin would speak to the crowd, telling stories of his relationships with various people in the room, of his upbringing and where some of his music was coming from. He called up several of his friends to play with the four-piece, including renowned saxophonist and long-time friend, Kamasi Washington. Before the show, Martin also shared his opinion on Jammcard and how it’s benefitting the artist community unlike anything else.

“It’s unique because it’s for artists. It’s for us. It’s for us to be us. Artists are so used to playing in the background and making this world turn, and we never get a chance to be acknowledged even amongst our peers because we’re all so busy working to support our families. Jammcard is very important because it brings us close together as one, and we’re not separated. There’s no need to be divided no more in life. No more division, no more race issues, no more human issues, there’s other shit. I think Jammcard brings people together on a fair playing ground … What they told me America was, they lied to me, but Jammcard feels closer to what they told me America is supposed to be like.”

The passion behind that strong sentiment pulsed through Studio A, from the moment the doors opened, to about 11:30pm when the last notes of the Rhodes faded out, and the distinction between performer and observer faded into a sea of like-minded music professionals, all in one space together, free to mingle and connect with whomever they came across.

Among the crowd was another JammJam first-timer, Andrea Lisa. Andrea is a guitar player who was born in South Africa and raised in New Zealand. While she’s not on the app yet due to her current residency status, she was able to attend, thanks to a friend of hers who vouched for her legitimacy. After the performance, Andrea was spotted high-fiving and taking photos with musicians like Thundercat, who was in the audience in support of his brother Ronald.

“Well I’d seen one performance on the Internet a few months back, and it was insane,” said Andrea. “But this … being where I was standing, and just feeling–it’s hard to even find a word to describe it, but it was mind blowing. There were times where I felt like, my heart, it wasn’t beating fast or anything, but it felt strange, like something was fucking happening. I just can’t explain it. All the musicians, and so many good people in that room. Those guys were playing from their souls. There was something else going on.”

The glazed-over look on Andrea’s face as the night came to an end mirrored the expression of mostly everyone else as they slowly filtered out onto Sunset Blvd. Our heads were spinning, and every fiber of our being had been infiltrated by the music made that night. It was as if we had all transcended into a newly unified understanding of one another, and for some it felt like a dream–the side-effects of being fortunate enough to have experienced a JammJam.